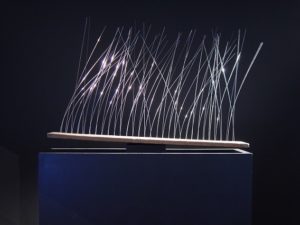 As an artist – an acclaimed practitioner of the aesthetic – the late Len Lye  has become internationally known for his “figures of motion”. Like Moshe Feldenkrais he was not interested merely in movement for movement’s sake. He was interested in expressing movement, a universal phenomenon in all things and events, as something experienced in the human body.

It was not only the motion of what he could observe around him that he found aesthetically interesting but especially its connection to human life and movement. You see and feel the human element of movement in his kinetic works, for example his renowned wind wands – large long pieces of tubular steel that allow for free movement in all directions with different patterns and tempos. These are on a fixed base that in the ambitiously large scale of his installations are required to take an enormous physical load.

I was especially taken by his much smaller work “Grass” at the Govett Brewster Gallery in New Plymouth. It consists of  slender, tubular, flexible, steel rods, resembling species of New Zealand native grasses, fixed into a flat wooden moving base – as you can see here. I was intrigued by the effect of gently waving grass with an accompanying humming sound. What particularly interested me was how these effects resulted from the movement of the wooden base that not only tilted up and down but moved across from side to side horizontally, left and right, when looking at the base lengthways.

The theme for my regular Awareness Through Movement classes this term is the pelvis and its functional connections in the human body.  In Lye’s “Grass” I could see and feel the “embodiment” of human movement. The wooden base for the “blades” grass evoked the functional movement of the human pelvis in a way that his other works with a stationary base do not.

It reminded me of how the pelvis supports a flexible upright spine and the parts of the body directly or indirectly attached to it. A functional pelvis is able to move freely between the hip joints in a way the allows easy use of the legs aligned to the up force of gravity from the ground through the feet and ankles that reciprocally support the legs and connected pelvis and everything above the pelvis.  At the same time the pelvis as an intermediate base supports flexible functional movements in the back chest head shoulders and arms above itself.

Below the wooden base of “Grass” was the mechanism that allowed movement of that base which in turn promoted moment of the metal grass. You could say the mechanism was the “ankles” of the sculpture  connected to its “feet” the, stationary base, resting on the “ground” (shelf) where the kinetic work was displayed.

This playful and highly imaginative work of art made me realise how wonderfully complex is our functioning body in movement. The real human feet are themselves a feat of extraordinary architectural engineering. Each foot is composed of a flexible bony structure of many pieces with multiple arches connected through the ankle joints to articulating jointed legs. The legs in turn are connected to the intermediate base of the pelvis, a moving “platform” for all kinds of activities involving the moving  connected parts above.

Lye undoubtedly was well aware that the human body is so much more richly complex than any work of art can fully express. But “Grass” and his other artistic creations are fascinating and engaging evocations of that universal, human, functional richness.

Individual Care and Falls Prevention
THE MUSCLE MYTH
Felden-WHAT? - "No pain, MORE gain" movement re-education
Kinaesthetic learning - the key to learning how to function in the world at any age
Back Pain Truths and Solutions
THE ROAD TO NEW YORK

Want us to notify you when we update our Blog?

If you'd like to receive an email notification when we add a new Blog Post, please advise us via the link below: