As we were driving through Kelburn to the Wellington CBD the other day I noticed several people walking to work with their heads down. One was holding an ipad in one hand and scrolling down with the other, another was keying into his smart phone, some had earphones on as they strolled along. Even those with no electronic gadgets tended to be gazing downwards. Only one – a young woman at the lights on the corner of Victoria St and Vivian St – stood upright, looking attentively about her. She checked her mobile briefly then put it back in her pocket.

This brought to mind an item that hit the news in 2014 – you may remember it – ‘text neck’. The US news media had picked up on the results of a study by New York spinal surgery specialist Kenneth Hansraj. The story went viral worldwide ending up in our NZ newspapers.

Hansraj and his team had constructed a model of the human spine and head and then subjected it to the ‘pressure’ of flexing the head forwards – mimicking what millions of us do everyday using our smart phones. The human head is surprisingly hefty weighing in at 5 kilos on average. They found that bringing the head downwards dramatically added to the pressure on the spine. Even a relatively small angle of 15° more than doubled the effective weight of the head on the cervical (neck) spine to 12.2 kilos. At a 30° angle this tripled it to 18 kilos and at a 60° angle to 27 kilos. They were not able to measure what happened at 90° – perhaps (and I’m guessing here) because by that stage the ‘head’ was too unstable and kept snapping off the ‘spine’. A 60° angle sounds a bit excessive. Who would bend that far? But looking at Hansraj’ diagram below I would say that it is within the range of what I have seen. 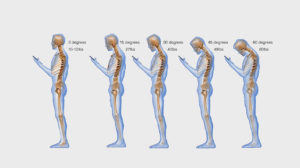 Kenneth Hansraj: Assessment of Stress in the Cervical Spine caused by Posture and Position of the Head, 2014

So what’s the problem? After all the human head and spine are designed to be flexible and bend. The problem lies in the amount of time spent in this stressful position.

Hansraj believes it has reached epidemic proportions: “Just look around you, everyone has their heads down.” Certainly my brief ride to town confirmed that!

“The problem is really profound in young people,” he said. “With this excessive stress in the neck, we might start seeing young people needing spine care.” (Wear-and-tear on the spine is normally only seen in people over 50.)

Hansraj advocates smart phone users make an effort to look at their phones with a neutral spine and avoid spending hours each day hunched over. He defines neutral spine or good posture “as ears aligned with the shoulders and the ‘angel wings’, or the shoulder blades, retracted. In proper alignment, spinal stress is diminished. It is the most efficient position for the spine.” And suggests users look down at their device with their eyes so there is no need to bend the neck.

On the face of it, this is good advice. Addressing the way we stand and move is the key. However in my experience as a Feldenkrais® practitioner it is almost impossible for most people to achieve the neutral, non-damaging position that Hansraj recommends and illustrates in his diagram – the 0° position above.

This is because after years of use of devices such as stationary and laptop computers, tablets, mobile phones and more recently smart phones, many people have habituated their bodies to poor postural positions whether sitting or standing. In particular their middle and upper spine has acquired a rigidity that reduces their flexibility. Thus pulling back the shoulder blades while they have a rigid, even a slightly kyphotic (i.e. bent over), middle and upper spine will prevent their head ever attaining its optimal position. Pulling back the shoulders blades may only accentuate the problem with the head position.

Nor will advising people to ‘look down at your device with your eyes’ achieve much. A more radical approach is needed. Check out my next post for more about this radical approach.